Starting today, I’m going to try something new to help cut down on the long stretches of nothing that sometimes inflict this website. Every Tuesday, I’m going to run a quick recap of my various projects so readers can keep tabs on where everything is in their respective processes.

And I’d like to remind everyone that visitors can comment on any content on this site, so if any of you have any questions or comments about anything, the Tuesday update post is as good a place as any to hit me up. 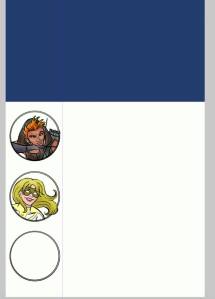 Cheap Thrills Digest: My editor, Julie Tremblay, turned in her edits on my upcoming collection of short stories on Sunday, and I’ve finished implementing the corrections and formatting the book. Now all that’s left is the cover art, which Tricia is working on now. We’re running with a concept that invokes old pulp adventure magazine covers, as you can see on the right.

Action Figures – An Adventure in Babysitting: My first AF short is part of the aforementioned shorts collection, so I took advantage of the fact Julie gave it a new polish and posted the revised edition on the website, where it originally appeared.

Action Figures – Issue Six: Power Play: I’m working on my final pre-editing stage revisions this week, but I’m not planning to send it off to Julie quite yet. I have to recoup some expenses from prepping Issue Five: Team-Ups (which is selling very well, I’m happy to report), and I’m hoping to get another project squared away first.

The Adventures of Strongarm & Lightfoot – Assassins Brawl: This is that other project. My goal is to have the follow-up to Scratching a Lich finished in time for a fall release. I’m about a third of the way through the first draft, so we’ll see how it goes.

Action Figures – Issue Seven: The Black End War: About a quarter of the way through the first draft. I’m taking my time with this one because it’s a fairly radical departure from the series. No tentative release date set.

I have three tentative and one confirmed book signings on my calendar. First, I’m on a short wait list for the New Bedford Bookfest this weekend. This is a new event that filled up very quickly, and the organizers are already planning a fall bookfest. With events like these there’s always a chance that another author might bow out and I’ll get a last-minute call to participate, so my fingers are crossed.

Next, I’m waiting to hear back from the organizers of the Worcester Local Authors Fair, hosted by the Worcester Public Library, and the spring OtherWhere Market at Mill No. 5 in Lowell. My applications are in and I expect to get into both, which are scheduled for the beginning and end of April, respectively.

Finally, I’ll be kicking off the 2016 Meet the Author series at the fall Connecticut Renaissance Faire. It’s the second year for this event, and I’m delighted the producers decided to make it an annual thing. I’ll be there on October 2, Sunday of the opening weekend, so come on by, say hello, and enjoy a great show.

Fellow super-hero author and old friend Mark Aberdeen (the Dex Territory series) gave me a nice little shout-out during an interview with Rave Reviews with Nonnie Jules. Go give it a read!

Just a quick post today, because I’ll be spending most of the day at Hartford ComicCon, scouting the place with my wife as possible vending venue for Storied Threads next year.

Yesterday I assaulted everyone with news about the release of The Adventures of Strongarm & Lightfoot, so today I’m giving some space to a couple of my fellow indie authors so you can learn about their stuff.

First, my friend J.M. Aucoin’s Jake Hawking collection, Jake Hawking and the Bounty Hunters, is on sale for one week at 99 cents to celebrate International Talk Like a Pirate Day, which starts today (arrr, yo ho). Click on the cover image below to jump to Amazon and order that.

And then Mark Aberdeen has just released the second installation of his Dex Territory series, Knight and Dex. Once again, click the cover image below to go spend some money on him.

If you absolutely must indulge your need for Strongarm & Lightfoot, the best way to do that (aside from pre-ordering the Kindle book, hint) is to hit artist Patricia Lupien’s RedBubble store and pick up something with her awesome cover art on it. It looks something like this:

Boy, that title made me feel old.

Anyway, I could spend this time making with the blabbity-blab about how my year was as a writer, but I can encapsulate it like this: things were great and I expect them to get better in 2015.

For those of you who demand details, here’s what you can look forward to:

Yep, I have the series plotted out through next year! I’m obsessive like that.

Need more reading? Then let me share the love and give you a list of some of the interviews I’ve conducted with fellow indie writers over the past year…

Mark is an old friend of mine. We worked a particular renaissance faire together for a few years before life sent us in different directions, but in recent years we reconnected via Facebook. Mark recently released his debut novel, Dex Territory, and he’s here to tell you about it (and you can click on the image to jump over to Amazon and buy it for the Kindle, or jump to the publisher link below, if it sounds like your kind of book).

Time to introduce yourself to readers. Who are you?

My name is Mark Aberdeen, I’m originally from Connecticut, but have kicked around the planet a fair bit. I currently live in Georgia with my wife and a couple of rescue dogs. I work in telecommunications, but have had a long and varied employment in everything from retail clerk to submarine mechanic to cook to highly unpaid renaissance faire actor. I took up writing as a sideline and frankly as an escape from the technical field. It was nice to exercise the creative field. When you do this an engineer, things can go horribly wrong.

Your book is Dex Territory. What’s it about?

Dex Territory is the first of what I hope is going to be a long series. It exists as a standalone, but there are a lot of threads I can pull. The story centers on a police detective, Rick O’Shea, and he tracking a serial killer in a world where super powers exist. While during the investigation, a full on street battle occurs in the city, a robbery gone wrong. Rick and his partner notice that the supers, called Dexes (short for spandex), have significantly grown in number and something is strange with the known Dexes. This leads to a web of lies and betrayal and Rick is tasked to find who, or what, is behind the violence, what they hope to gain and not get killed while do so.

Who is your target audience? Who do you think would like this story?

I hope this book appeals to people who like urban fantasy, science fiction genre. The story also contains mysteries with hard-boiled characters that have difficulties with relationships. I wrote it because I wondered how a normal police detective would be able to live in such a world where anything is possible. It’s a very adult book with sex and violence and it’s a crazy over-the-top world, but it feels grounded.

Where did this idea come from?

The idea spawned from a gaming session back in early 90’s. My gaming group got into playing GURPS and we took a break from fantasy and did a campaign with supers. It was the most fun any of us had ever had gaming. We used our home as the backdrop and that idea stuck. The characters are different, the world is different, but the seed of everything came from a handful of weekends, alcohol, great friends and too much time.

And what about the title? What’s the story behind that?

What was behind your decision to go with a small press? Did you consider trying to find a larger publisher or self-publishing?

I started writing the book in 2004 and finished it in 2008. From ’08 until ’12 I’d been rejected by every mainstream publisher who dealt with any kind of genre fiction. The stack of rejection letters props up a table. I considered self-publishing, but honestly, I wanted validation. I wanted someone to tell me this was good enough. I gave it up. I wrote a little for a magazine and I was going on with my life. A friend mentioned me to an editor at a small press. He was looking for new talent. I got in touch with Terry Wright and pitched him my story and he invited me to submit it. He had a contract in my hands a week later. Terry got a hold of it and tore it apart. A lot of excessive exposition, clunky parts, some inconsistencies and we trimmed the hell out of it and turned a hundred thousand words into sixty five thousand and had a really solid story. I reworked a few things and I’m very proud of it.

What’s your next project?

I’ve started the sequel. I hope to put several of these out. I have some good strong characters and as long as the voices speak to me I’ll continue to write what they say.

Where can readers buy your book?

Readers can find my book at www.TWBPress.com. They can find me on Amazon in both e-book and trade paperback. I also offer signed copies on my blog at http://markaberdeen.blogspot.com  I have instructions and a checkout button on the blog. It’s the slowest way to put a copy in a reader’s hands, I warn.

Where can readers find you online?

Drop by say hello. Facebook is my social media of choice. Friend me.