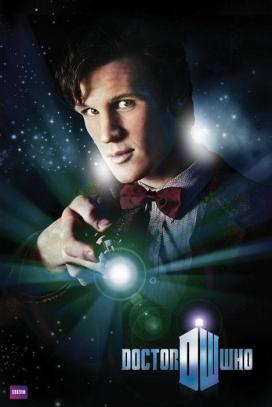 If you recall my last post, I griped that mainstream comic books did not engage in any true, lasting character development, and I opined to my friends that I felt the same way about Doctor Who; the Doctor himself experiences precious little progression over the course of a given actor’s time in the role, and aside from the standard post-regeneration adjustment periods, once the character is set he tends to stay the exact same character until the next actor takes over the role.

I stand by that opinion. Looking back at the last three actors to portray the Doctor — Christopher Eccelston, David Tennant, and Matt Smith — I see very little difference in the Doctor at the start of each actor’s tour of duty and the Doctor at the end.

Which is not to say there is no growth whatsoever. Early in David Tennant’s turn as the Doctor, the character had a dark, almost vindictive aspect that was tempered over time. Matt Smith’s Doctor just had his closest brush with death ever, and he’s poised to take a different approach to how he does things, now that the universe at large believes him dead.

Overall, however? All the  traits, quirks, perspectives, and behaviors remain static.

That’s where the companions come in.

The companions have long served as the audience’s proxy, the Everyman (or, more often, the Everywoman) who gives the Doctor someone in-story to explain everything to (when he or she is not serving as a plot device), and while the companions also tended to lack development in the series’ original 1963 to 1989 run, they’ve received much better treatment by the writers of the current run.

It’s a smart move by the show’s creative team to give the companions (and the extended supporting cast) the responsibility for providing a sense of progression. It allows the Doctor to remain the Doctor while still giving the series a sense that things are moving toward a goal. With the lamentable exception of Donna Noble’s (Catherine Tate) last-episode full regression, the companions have ended their run changed from how they began.

I know a lot of fans have complained that Matt Smith’s run has basically been the Amy-and-Rory Show, but I’ve found their tenure as companions the most satisfying of the entire modern run. When the audience first meets the grown Amy, she is a stuck-in-the-past dreamer with no direction in life and no eyes for anyone except the Doctor, while Rory is a milquetoast who suffers from a serious case of unrequited love for Amy.

Over time, Amy and Rory have found their footing as people, shaken off their mental shackles, and in coming together became a stronger whole than their separate flawed parts. Look at Rory in his first appearance, when he was a dithering doofus, and compare him to the man who teleported into a cluster of Cybermen to deliver the most bad-ass line of the season amidst a backdrop of exploding Cyberships: Would you like me to repeat the question?

So: thoughts? Am I way off-base on the Doctor and his companions? Am I missing something? Let me know.