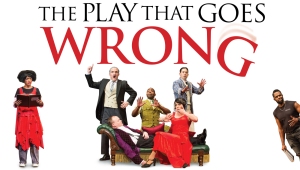 It’s been a while since I’ve done one of these, but here we go.

Several months ago, I caught a production of The Play That Goes Wrong and immediately fell in love with it. The concept: The Cornley Polytechnic Drama Society is putting on a murder mystery, and as the title suggests, everything goes wrong during the performance. The (bad) actors bungle lines and miss cues. Props malfunction. The set falls apart. But the cast keeps on going, despite the increasingly hilarious gaffes.

My description does not do this show justice. It’s the kind of thing you have to see to fully appreciate, because the physical comedy and sight gags are absolutely brilliant, more so for being performed live without a single IRL misstep.

The live show is, obviously, on hiatus until the coronavirus passes, but when the touring show resumes, go see it live and in person.

In the meantime, to get a taste of the play, you can watch The Goes Wrong Show, currently available on Broadway HD (which I also recommend). The Cornleys put on a series of half-hour one-act plays that put the fake theater company’s comedic sensibilities on full display. The first series offers five episodes plus a Christmas special, so you’ll burn through it pretty fast — and then wait in agony for series two to arrive (which it will; the BBC renewed the show! Yay!).