Let’s start things with an official countdown to the start of Arisia 2019! It’s a little over two weeks away but they’re going to be a fast two weeks. I’m already making sure everything is packed and ready, and I’ll probably do that again several times before the show.

So far there’s been one last-minute change, and that’s to the dealers room. It’s been relocated from the messanine level to the ground level, and will take up studios one and two and the Loft. I am now at table 54, which is dead center of the dealers room.

Well-Behaved Women: The current drafts of books two and three are done. Book two is ready for my editor and book three is ready for test-reading.

The Adventures of Strongarm & Lightfoot – Scratching a Lich: Audiobook in production.

The Adventures of Strongarm & Lightfoot – book four: First draft is back in the works! Time to get cracking on this again and hopefully have a new S&L adventure ready by the fall! 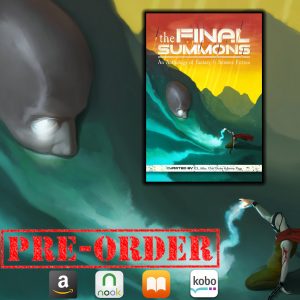 The Final Summons is on pre-sale now through all major book retailers! Get your copy now and then go to TheFinalSummons.com to collect your free swag, including laptop wallpapers and a collection of short stories by the New England Speculative Writers group. You have a little over a month left to act before The Final Summons is released!

The New England Speculative Writers group if offering not one but two free books to new newsletter subscribers. Simply click on this link and sign up for the newsletter, and you’ll receive e-book versions of the two collections pictured here, featuring novel samples from NESW members. The fantasy collection includes the first two chapters of The Adventures of Strongarm & Lightfoot – Scratching a Lich.