While scrolling through Tumblr the other day, I came across the image at right on Brian Michael Bendis’s account.

This is artwork by the late, great Dick Giordano, and it appeared on official DC Comics stationery. Take a close look and you’ll notice that the characters’ insignia are backwards. That’s because the image was printed on the back of the paper, so when you read the front, the characters would show through and would appear to be holding the DC logo in the letterhead.

I know this for a fact because my first ever rejection letter was printed on DC Comics stationery (the art on the back at the time was, I believe, by Jose Luis Garcia Lopez, another DC legend).

The backstory: I was at the time a student at the Joe Kubert School. I enrolled with the intent of becoming a comic book artist, but as I realized I was very limited as an artist and didn’t have a future there, I started transitioning to the writing end of things. Many of my other classmates were already submitting their artwork to DC and Marvel, as well as coming up with creator-owned projects to pitch to the smaller publishers.

I followed suit in my own way. DC’s then brand-new Vertigo line was gaining momentum, and I found an old and mostly forgotten character in Dr. Occult that felt ripe for a rebirth under the Vertigo banner. I wrote a spec script, put together a submission package, and sent it all to editors Karen Berger and Jonathan Peterson. They passed it on to Tom Peyer, who rejected it, which he absolutely should have; I don’t remember the specifics of my proposal, but I’m certain that it was terrible.

I wasn’t surprised by the rejection, nor was I disappointed. I was actually quite thrilled that I had been acknowledged by DC Comics, one of the “Big Two,” and bonus, I had a really cool piece of official DC stationery to show off to everyone — and here it is: 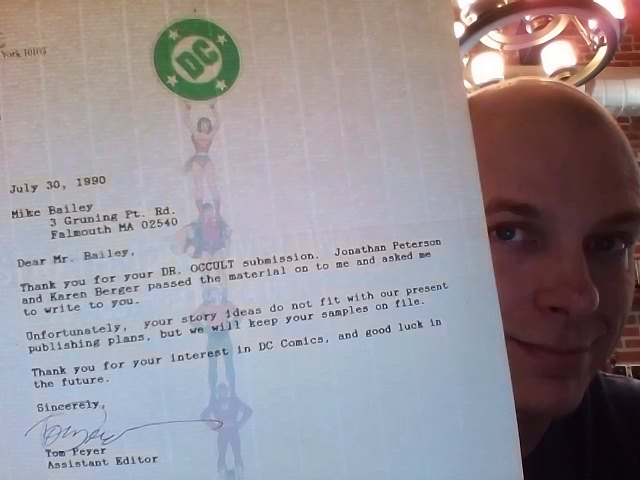 As you can see, I still have that rejection letter, along with every other rejection letter I’ve received since then, primarily to serve as motivation to keep going and succeed at my craft. I wanted to one day be able to take all those rejection letters — all seventy of them — and symbolically laugh at everyone who turned me down before trashing them, thus putting that phase of my writing career behind me for good.

Well, it’s time to do just that.

Bye-bye, failure phase. We had a good run, but I’m sure not going to miss you.