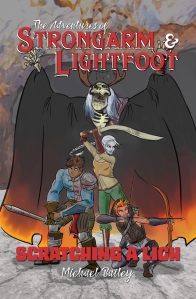 Happy Cyber Monday, shoppers! Hope everyone had a good holiday and none of you had to work on Black Friday.

First up in my self-promotion-filled post for today is a reminder that the Kindle edition of The Adventures of Strongarm & Lightfoot: Scratching a Lich

is on sale today only for 99 cents! Get it for yourself or as a gift for someone who enjoys their fantasy tales with a healthy dose of humor.

are also on sale today for 99 cents.

Now, back to me, with some updates on upcoming books.

First, Action Figures – Issue Five: Team-Ups has, unfortunately, been pushed back again. I apologize for the delays, but this is an unavoidable pitfall of life as an indie author. The book itself is done, but the cover art is in-process as time permits. My awesome artist, Tricia Lupien, has other professional and personal responsibilities that sometime take precedence over my needs, and in the art world, there’s a saying: “Do you want in now, or do you want it good?” I’d always prefer quality over speed, so I’m happy to give Tricia the time she needs to live up to her own high standards.

Team-Ups is now slated for an early January release, so you’ll have something nice to spend your Amazon gift cards on (hint). I’ll be posting preview chapters in the coming weeks, so stay tuned!

Next, I’m happy to report that over the holiday weekend, I wrapped up the first draft of Action Figures – Issue Six: Power Play, and began work on what I’m calling, for now, Issue Six-Point-Five, which will be released as a short story on this website. Be advised, it’ll be a while before it sees the light of day. Specifically, it will be released after Action Figures – Issue Seven: The Black End War, which is tentatively set for a spring 2017 release.

I know, I’m a miserable tease.