Happy Friday Jr., everyone! Here we are with the next in a series of quickie interviews with the authors of the Indie Superhero StoryBundle, and today the spotlight shines on Matt Adams. Yoiks! And away! 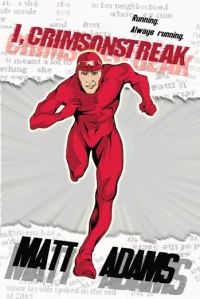 1) It’s high-concept pitch time. In 20 words or fewer, what is your book about?

2) Why did you decide to tackle a superhero story as a prose novel rather than as a traditional comic book/graphic novel?

When I read comics, I tend to read collected editions because I like to have the full story. In a sense, I, Crimsonstreak is a collected edition in novel form. I’ve always loved comic art and style, but I wanted to dig a little more into a superhero’s mind. A novel, I thought, gave me the best chance to do that.

The book is told entirely in first-person through Crimsonstreak’s perspective. Since he’s a super- speedster, his mind is always going. He can take the time to make an observation and can’t stop relating circumstances to something he saw in a movie or TV show.

You make a tradeoff when you go the prose route for a superhero story: you lose the art and the dynamic visuals. On the other hand, you give readers the opportunity to get a little closer to your heroes and villains, something you don’t always get in the comic book format.

3) One of the notable earmarks of our current Indie Superhero StoryBundle is that “indie” part. Are you an independent author by choice? And what are the big pros and cons of life as an indie author?

My book was released from a small press called Candlemark & Gleam. I always saw I, Crimsonstreak as kind of a “starter” novel for me. The main novel is relatively short compared to some of my other books and special appendices in the back flesh out the rest of the story and the world.

I didn’t know if a major publisher would be interested in the novel given that Soon I Will Be Invincible had been released some years before. I considered going “full indie” and self-publishing the book, but I didn’t feel like I was quite ready to go that route.

Crimsonstreak needed some editing and guidance, and I feel like my small publisher really helped me craft it into a better novel.

Obviously, when you go small press, you’re kind of in that “nether realm” between indie and traditional publishing. You do a lot of your own marketing and spend time setting up book signings and that type of thing. You split revenue with your publisher, although print royalties are higher than what you’d get with a larger publisher. Ebook royalties are higher than traditional pub, but lower than self-pub.

You get some of the benefits of going “full indie” in that you help forge the direction of the book design and that sort of thing. You get a little bit of the traditional publisher world in that you don’t pay for cover design or editing.

Small press really is a balance between self-publishing and working with more traditional publishing.

4) Superheroes are well-established archetypes, and their stories have their own sensibilities and internal logic. How did you play with or subvert the tropes of superhero fiction in your story?

Generally speaking, every superhero story owes a debt to Marvel or DC. I mean, you can’t wrap your head around superhero comics without thinking about Superman, Batman, Spider-Man, X-Men, etc. At the same time, the genre is really flexible. You can have a Batman comic that’s more of a detective story. A revenge fantasy with the Punisher. A supernatural tale with Ghost Rider. Allegorical social commentary with the X-Men. Cosmic sci-fi with Green Lantern. Spy thrillers with the Black Widow. It’s not all just POW-BIFF-BANG!

So, yeah, my book has Batman-type character called the Crusading Comet. He’s a rich guy with gadgets and gizmos—the real “professional” crimefighter with ridiculous acronyms on his signature tech and a snarky butler named Mortimer P. Willoughby, who’s a smart-aleck version of Alfred Pennyworth. The hero also pays tribute to The Phantom in that there have been several Crusading Comets, with the mantle passed down from father to son over the years.

I have a lot of fun with the Comet (and Mortimer). They don’t really think much of Crimsonstreak, whose superspeed was genetically inherited and not really “earned” in their estimation. And it’s often Mortimer, the prim and proper butler, who gets the team out of jams most of the time.

We’re used to seeing traditional comic book heroes make all the right decisions and save the day on their own, but Crimsonstreak makes plenty of mistakes. In fact, he often makes things worse and digs himself a deeper and deeper hole. He’s imperfect.

Also, much of the action in the book takes place in the Midwest, an alternate version of Indianapolis, Indiana, to be precise. Most of your big-time superhero stories take place in much larger cities (especially New York, the nexus of 95% of all superhero shenanigans), so placing the action in the Midwest, where we live life at a slower pace, was a way to subvert that.

5) Beginnings, middles, and ends. What is your favorite/the easiest part of a story to write and which is the hardest/least favorite?

Let’s just say The Dreaded Middle and I aren’t on really good terms. I start each novel I write with a “road map” that includes a clearly defined start and end with a few key “beats” and subplots ironed out as well.

Still, I get bogged down in the middle, which becomes a poorly paced, cluttered mess no matter how much I try to outline things. However, we all know first drafts absolutely stink, and I manage to fix this mess during revisions.

I’m much more confident in where I start the story and where I end it. It’s just that gooey middle that traps me. I will say this has gotten better over the years as I’ve written more books, but it’s always in the back of my mind.