Hey, folks. My friend Justin is getting ready to release his new book, Honor Among Thieves (Hope & Steel Book 1)

, which is now available for pre-order for the Kindle. Here he is to tell everyone about it! 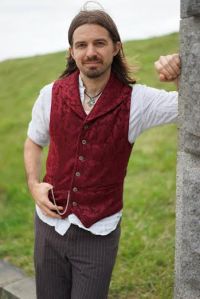 Tell everyone about the new book and what inspired the story.

Honor Among Thieves is the first book in the Hope & Steel series. It takes place in early 17th Century France, during King Henry IV’s reign and about a decade after the French religious wars ended.

In the book, we follow Darion Delerue, a former soldier turned highwayman, and Jacquelyna Brocquart, a lady-in-waiting for Queen Marie de Medici. Both are unwillingly thrown into a political plot to undermine the crown and could throw France back into chaos and civil war.

As for inspiration, I’ve always been a huge fan of swashbucklers and the historical adventure genre. I’m a carnivore of all things Three Musketeers. I love the high adventure, the weaving of fictional plots with historical events, and the camaraderie of the characters. I’m also a fan of Arturo Perez-Reverte’s Captain Alatriste series, which is full of swordplay, history, and a dash of realism. So I tried combining both into the Hope & Steel series. You get a lot of high adventure in the plots but with the gritty realism of life of 17th Century France and all its consequences.

Your previous releases (the Jake Hawking books) were all short stories. What drove you to tackle a full-length novel?

It’s funny, Honor Among Thieves gave birth to the Jake Hawking Adventures in some ways. I was in the middle of a major re-write for Honor Among Thieves and I was getting a little frustrated with the process. I was struggling to fill major plot holes and I was second guessing myself on what point of views to keep and what to cut. I needed to step away from the project, but I also hate going too long without writing anything. I need to feel productive or I get grumpy. So I decided to write a few piratical short stories. Nothing serious. Nothing grim. Just fun, light-hearted tales. And voila! Jake Hawking, Little Queen, and the crew of the Broad-Wing were born.

Doing the Hawking stories also gave me my first taste at self-publishing, which was good. The trio of short-stories and then the omnibus collection let me ease into the industry and figure things out without like hiring a cover artist and formatting for Kindle and Createspace.

But it’s always been my plan to write full-length novels.

Is this the first in a series for this character or a stand-alone novel?

This is the first book in what I hope becomes a long-lasting series. I have the first four books more or less outlined in my head, but I’m hoping for a long and prosperous career of fighting for Darion and company.

Honor Among Thieves has been about three or four years in the making. It was the first full-length novel I actually completed (I had tried and failed at completing novels a few times prior), so there was a lot of problems with the first draft. It was way too long (140K words), and the second half of the novel didn’t really jive with the first half. It was a perfect case of the story taking a life of its own and running away from my outline.

So I basically torched the first draft and started over. I thought I would be able to use large chunks of the original copy in the second draft, but I think I rewrote about 90% of the book. In the middle of all this is when I took a break and let Hawking come to life. Then I went back and finished it. Sent it out to test readers. Went over their feedback and then hunted for an editor, which was a bit of a nightmare in itself. Finding one that was good and also in my budget was tough. It’s one of the harder parts of being a self-pub author.

I really wanted this book to come out last October, but I also didn’t want to rush things. Delaying it eight months was the right course, I think.

And, of course, I still need a day job to pay the bills, so that’s 8-10 hours of possible writing time gone. I get writing in during my lunch break and I try to do some writing after work, but some days the brain won’t have it, so an hour or two might be all that I get done. It makes getting projects done a slow process.

How research-intensive was this story?

A lot. I wanted to fictional characters to interact with historical figures and weave fictional plots into real world events. I also wanted to paint a picture of what France was like in 1609, and not just what we all assume it was like because of the movies. So to do that I needed to do a good amount of research into what was happening and who was in charge and doing what, and who liked (or didn’t like) who, etc. for this time period.

Amazingly, my local library (Boston Public) didn’t have a lot of books on King Henry IV of France or that time period. It seems to be a very un-sexy era for researchers. However, I did find a lot of research material via Google Books that I was able to download for free. I found about 10 books from Google Books in total and bought a couple of more online and in local bookshops. I also looked for maps of France and Paris from around the time, so I could get street names and bridge names correct for the early 17th Century.

Readers shouldn’t take my portrayals of historical characters as gospel, but a lot of research went into this swashbuckler to get things right. I want to get people interested in the era and have them do their own research after.

I’m going to assume there are plenty of action sequences. What was your process for putting those together?

What’s a swashbuckler without a little action, eh?

There’s a good amount of fighting in this novel. Far more steel is brandished in Honor Among Thieves than in the Jake Hawking Adventures. Darion’s a former soldier turned highwayman; he’s young, proud, and can be hot tempered. Drawing steel is how problems get solved in his life – for better or worse.

But unsheathing one’s sword is a serious affair. You don’t draw your rapier unless you were absolutely certain you were ready to use it. It’s not like modern Olympic fencing or even HEMA/SCA rapier combat. It meant life or death.

So I try to approach my action scenes in the same way. I don’t just throw in a fight scene for the sake of a fight scene being there. Action scenes need to serve a purpose in fiction. It needs to convey some new information about a character, solve (or create) a problem, or further the story somehow.

We have to talk about the cover, because it’s pretty kick-ass. Did you have any input on the concept, or was it all left to your cover artist?

I absolutely love this cover. Graham Sternberg made it for me. He’s a good friend of mine from my fencing circle and also a fantastic artist, so he was perfect for the job.

The concept of the cover was a little of my idea and a lot of Graham’s idea. When we started talking about what the cover should be, I wasn’t sure what I wanted it in terms of action and setting, but I knew what I wanted the overall feel and tone of the cover to be. I wanted the cover to convey the action and sense of urgency of the story, and I knew I wanted it to look like a painting. I wanted the brush strokes and the roughness of a not-so-quite-finished painting to be seen. I also wanted more jewel and earth tones, so it would be a little different looking than the Hawking covers, which use a lot of primary colors.

So that was my main contribution. Graham did the rest. He came up with idea of doing a wrap-around cover, so the front and back is one artwork – which I loved. He drew up about half a dozen pencil sketches of ideas based off the plot of the book. From there I chose the ones I liked and gave some feedback based on what I saw and he would go do what he did best until we had the final design.

What’s the next project?

Got a few projects in the works, all at different stages.

I have a stand-alone pirate revenge story that’s about 20K words in. I think that’ll be my “I need to work on something different” project when other stories are becoming obstacles. I have an idea for a pulp mystery/suspense series that I’m aiming to work on – at least for a little bit – in the fall. I think that’ll be a novella length project. And I’m world building, off and on, for a possible fantasy series, but I don’t expect to actually write that for some time.

Of course, once Honor Among Thieves is published I’ll start the second book in the series. I have a general outline all set; it’s just a matter of filling in the details of the plot. There are some bread crumbs in book one that’ll lead to book two.

I think I have the classic dilemma of too many ideas, not enough time!