Green Lantern showed up in the mail the other day, and I knew going in that this was not a well-reviewed film (it earned a painful 27 percent on Rotten Tomatoes.com). Not quite Catwoman bad, as comic book-based movies go, but certainly not The Dark Knight either. 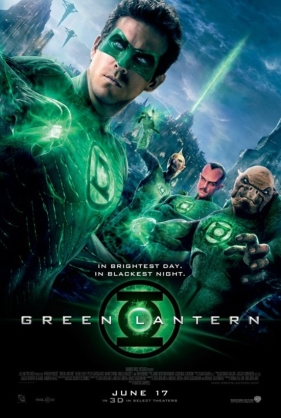 It wasn’t a good movie, but it wasn’t terrible either. What it was, however, was nearly two hours of lost opportunities.

Look at the strongest of the comics-turned-films — The Dark Knight, X-Men: First Class, Iron Man — and one of the elements that makes them great is some strong characterization.

The big problem with Green Lantern is that none of the characters, including the title character, have an appreciable character arc, which is especially tragic since the writers had a potentially meaty arc sitting right in front of them.

I’ll start by looking at the title character, Hal Jordan. As a child, he saw his test pilot father killed in a crash, and that pivotal event winds up defining his life in a somewhat perverse way: Hal grows up to become a test pilot — a very reckless test pilot. Why would he embrace a career that killed his dad?

Geoff Johns, who writes GL’s comic adventures, addressed this in his take on Green Lantern’s origins, tying the death of Hal’s father into his borderline self-destructive behavior; Johns portrays Hal as a man who faces his fears with such ferocity that it borders on a death wish — and yet, he never truly faces his great personal tragedy. Simultaneously, Hal is honoring his father’s bravery; Pappa Jordan sacrificed himself to steer his crashing jet away from spectators, saving their lives.

It’s an interesting contradiction. That complexity would have put some great meat on the character’s bones for Ryan Reynolds, but all we got was one instance in the opening sequence when, while his own plane hurtles toward earth following a combat demonstration, Hal freezes at the controls as he flashes back to his dad’s death. Later he pays some lip service to his fears and his difficulty in facing them, but Reynold’s Green Lantern neither gains a sobriety that tempers his recklessness nor does he discover untapped courage to help him overcome clipping fear. This aspect of his character is introduced and resolved without ever being explored.

Further, it’s never clear whether Hal Jordan is a pseudo-fearless daredevil or a man who bares keeps his anxieties in check. He shows elements of both, but neither aspect of his personality hits an extreme; he’s more a balliser-than-most type of guy with a touch of self-doubt.

Aside from failing to define the main character, and thus failing to give him a direction, the writers missed a chance to tie a great theme together through four other characters: Carol Ferris (Blake Lively), daughter of Carl Ferris (Jay O. Sanders), owner of Hal’s employer, Ferris Aircraft; and Hector Hammond (Peter Sarsgaard), son of Senator Hammond (Tim Robbins).

The plot establishes that Ferris Aircraft is in line for a lucrative government contract for a drone fighter, and Hal nearly blows the deal when, in front of Senator Hammond, he actually beats the “unbeatable” drone — and in doing so, wrecks one of Ferris’ expansive fighter jets. His actions nearly destroy the company, but Carol — the company’s heir apparent — manages to salvage the deal.

Hector Hammond gets involved when, through his dad’s behind-the-scenes manipulation, is brought in to examine the remains of Abin Sur (Temuera Morrison), the alien that gave Hal the power ring he uses to harness the power of Green Lantern.

The fear of failure is a basic and common human frailty. It’s something to which almost everyone can relate. And fear of failing a parent? That’s even more powerful. That’s the kind of framework the writers had in their hot little hands and failed to capitalize on in the main character alone: What if Hal’s fear was not of dying, but of failing to live up to his father’s (real or imagined) expectations, of failing to become the kind of selfless hero his father was?

Carol’s relationship with her father is touched on, and it appears to be just fine — therefore, dramatically dull. But what if Carol, facing the daunting prospect of one day taking over the company her dad built from the ground up, fears letting her father down? Especially in the face of a catastrophic financial blow caused by her erstwhile lover Hal — the man she personally chose for the demonstration? Instead of her saving the company complete off-screen, apparently with little effort or stress, there could have been a solid subplot involving Carol and her father dueling over whether she was worthy to take over.

As for the Hammonds, a couple of off-hand lines indicates that the senator thinks his son a loser, but it’s never clarified as to why he feels this way. Hector, a college professor, is a bit of a shlub, but that’s his greatest offense; he doesn’t ever come off as a disgrace to the family name or as simply failing to live up to some amazing potential. It’s also a question as to why Senator Hammond pulls the strings necessary to get his son into the lab holding Abin Sur’s body. Was he trying to give his slacker son a leg up on a better career? Was it a pity move?

This relationship could have been defined, and made much better, simply by employing the time-tested trope of playing Hector as a man following his own path while simultaneously trying to please a disapproving parent (think The Jazz Singer…or that episode of The Simpsons with Krusty the Clown’s rabbi dad).

The movie’s main threat is Parallax, a former Guardian of Oa (the Green Lantern Corps’ bosses) who tapped the power of fear and transformed into the crazed, world-destroying living embodiment of fear. Abin Sur, the greatest of the Corps, imprisoned Parallax, who escapes at the beginning of the movie and takes out his captor (leading to Hal inheriting the ring from the dying Abin Sur).

Sinestro, Abin Sur’s protege and the Corps’ biggest gun after Abin Sur himself, leads the Corps into battle against Parallax and gets slapped down, hard. In response, he proposes forging a new ring to tap the yellow energy of fear, intending to fight fire with fire. Before he can use it, Hal faces Parallax and sends the monster hurtling into the sun.

(I know, it all sounds pretty wild. Trust me, it makes perfect sense in context.)

Throughout the story, Sinestro is portrayed as proud, pragmatic, dedicated to the Corps, and uncompromising. Therefore, when at the very end of the movie he steals and dons the yellow ring, there’s absolutely no reason for it. Nothing that’s happened in the story feels like sufficient incentive for him to turn his back on his beloved Corps.

In the comics, Sinestro defected after he came to believe the Corps was soft and lacked the resolve to cross a few lines (murder, for example) in the name of the greater good. That would not have played well in the film’s story, but what if Sinestro had been explicitly faced with the opportunity to prove himself to the Guardians as worthy of assuming Abin Sur’s mantle as the greatest member of the Corps? His failure to take down Parallax — at the cost of several other Lanterns’ lives — and thus his failure to live up to the Guardians’ expectations AND Abin Sur’s legacy could have provided the motivation he needed to attempt the radical solution of tapping the yellow energy of fear.

Green Lantern had other problems at the script level, but had the writers focused a little more on developing an underlying theme and tying the characters in to that, the movie might have at least gone down as a noble failure instead of, as stated on Rotten Tomatoes, “Noisy, overproduced, and thinly written.”